All participants of the 2017 Seattle International Piano Competition are required to submit audio via .mp3 or .m4a file upload. During several years of running the festival, the organizers have noted several common issues that may drastically affect a participant’s chances for finalist selection. To ensure the highest chances of a quality review of audio, note the following common issues.

1. Strategize. Some performers will put almost anything on a disc, most likely something he or she most recently studied. There is no strategy in this. It is also surprising to observe just how much some performers are willing to put on a disc, sometimes even an entire live recital. 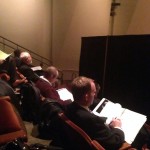 Does your selection show musical qualities as well as technical? We have seen many jurors come down to deciding based on a single, unaccompanied line in a quiet middle section for evidence of a simple and elegant melodic shape. Looking toward pure music will distinguish one over a handful of performers, all with great technical prowess. Is it beautiful? Is it artistic?

2. Filter. We advise performers to filter their recording selections with very objective ears. Very few pianists present equally across all genres and composers. Pick only the best side of yourself. The best of the best. And then ask for an outside set of ears (or two, or three).

3. Quality matters. No, your recording needn’t be professional quality to the degree of commercial-grade music industry standards. However, recording on an instrument that will respond both to touch and has the ability to resonate freely will present a performer far better than a practice room clunker or badly maintained out-of-tune upright in the basement.

Likewise, listen carefully to how the recording quality shows. The jurors are surprised by how many performers will lift audio from a handheld video recorder held at distance in a church-like setting (even professional participants!). This will not suffice. Most equipment of this type does something called compression…essentially, evening out sound levels so they are largely homogenous (soft sounds are louder, and louder sounds are reduced). Most popular music normalizes music this way as a standard. It also helps highlight speech in a noisy room. In classical music, however, compression is a killer, because it takes away all dynamic nuance, making performers sound all very much “sempre forte”.

Acoustic environment and microphone/recorder placement are important too. Too close, and it can sound harsh. Too far away and it is too distant and unclear. Small rooms tend to make piano performances very unfavorable.

It makes a difference to the juror who listens to one well-presented performance taken with acceptable equipment in a concert hall with natural reverb, following that with a performance in a small room on an out-of-tune piano. The performance levels may actually be similar. However, the former always presents far better and can skew an adjudicator’s perception. Consider that a poor recording of a good performance will always sound worse to an adjudicator who has just heard a better or ideal recording quality.

4. Read the rules. It can be frustrating and upsetting when applications are rejected because the applicant doesn’t read rules completely or carefully. Common mistakes are including one’s name where it shouldn’t belong (see #6 below). Such mistakes can cost a performer an important opportunity. We can’t stress enough: read all rules carefully!

5. Review, review, review. Listening to all audio tracks to the very end before sending it to something important. In the electronic age, it is far too easy to mix tracks, intending to send something different. We occasionally do hear things that were definitely meant to be edited out, but were not due to a hasty review or lack thereof. In 2015, the pool of participants included more than one who put something that was not intended to be there (voices, talking, stopping and starting, improperly edited track). Do not wait until the last minute to prepare your recording. The final process of filtering, sorting, and re-recording can and should be very time-consuming to prepare well. Not allowing enough time will mean careless preparation, and perhaps sending something you didn’t mean to send.

6. Sanitize Your Identity. The required track list, and the audio itself are handled directly by the preliminary committee. As stated in the rules, a participant’s name or other identifying mark cannot appear in any of the following places:

It is very unfortunate when participants leave any of these in the above places. The SIPF takes no responsibility to sanitize files, but the committee will throw out entries that may be in violation.

Presenting the Winners and Finalists…
September 14, 2022
Go to Top