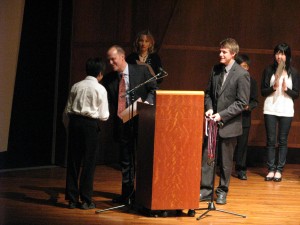 Distribution of awards at the 2011 SIPC

Singled out in 2010 by The Wall Street Journal as one of the world’s most inclusive competitions, the SIPC continues to provide one of the most equitable opportunities for artistic recognition in the world. This two-round competition invites aspiring artists to submit recordings in order to compete for prize money, recognition, and other awards.

Increased award money for the 2017 competition and new performing opportunities for semi-finalists during the September/October festival are among the changes.

Presenting the Winners and Finalists…
September 14, 2022