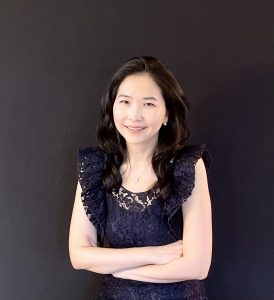 Having begun to play piano at the age of five, Dr. Jong Eun Lee graduated from the prestigious Seoul Arts High School in Korea. She went on to Germany to study piano performance under Professor Richard Braun, receiving her Künstlerische Reifeprüfung diploma from the Hochschule für Musik Detmold, Abt. Dortmund. She continued her studies with Prof. Roberto Szidon and earned the Konzertexam diploma at the Robert Schumann Hochschule Düsseldorf. During her 7 years in Germany, she gave numerous solo and chamber recitals and performed with the Dortmund music school orchestra as a winner of their concerto competition. Her performance was praised as a more poetic interpreter by the Ruhr Nachrichten and for demonstrating transparent virtuosity by the Westfälische Rundschau. She also participated and performed in the international music festivals, including International Summer Academy Mozarteum in Salzburg, Austria, Russian School in Freiburg, and International Brüder-Grimm-Musiktage in Steinau an der Straße. After moving to Seattle, she earned her Master of Music in Piano Performance from the University of Washington School of Music as a recipient of Ruth Sutton Waters Endowed Scholarship. She was featured as soloist with the University Symphony under the baton of maestro Peter Erös in Meany Hall, winning the UW concerto competition. She completed her Doctor of Musical Arts degree at the UW School of Music under the guidance of Prof. Craig Sheppard. Currently she is a collaborative pianist at the Shoreline Community College and is actively teaching at the Chopin Academy of Music in Issaquah, as well as at her private studio in Mercer Island.