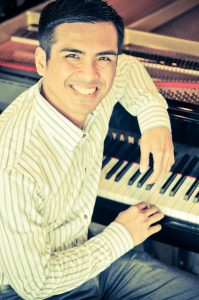 Ross Salvosa is the chairman and artistic director of the Music Without Borders Society in Vancouver-Canada and is currently a doctoral candidate in Musical Arts and a recipient of the Mildred Johnson Scholarship for music at the University of British Columbia under the guidance of legendary pianists Kenneth Broadway, Ralph Markham, Dr. Corey Hamm, Prof. Mark Anderson and Dr. Sara Buechner. He received his Bachelor and Master of Music Degree on a full scholarship graduating magna cum laude at the Conservatory of Music at Lynn University (formerly the Harid Conservatory of Music) under the tutelage of Dr. Roberta Rust and Philip Evans where he was also a recipient of the National Arts and Letters scholarship award.

Ross is renowned as a pianist-pedagogue and has been performing in concert venues around the world as an orchestra soloist, solo recitalist, collaborative artist, chamber musician and as a conductor. Ross has conducted lectures and masterclasses on piano pedagogy, and has been an adjudicator for festivals and competitions in Canada, USA, Chile, Argentina, Brazil, and the Philippines. Ross first captured the public’s attention at the age of ten after winning first prize at the National Music Competition for Young Artists under the tutelage of renowned Filipino pedagogues Reynaldo Reyes, Emilio Del Rosario, Mauricia Borromeo and Ruby Salvosa and has won numerous competitions since. Ross has an extensive range of solo, concerto and chamber music repertoire and frequently performs newly written contemporary works for solo piano and chamber ensembles.